5 Amazing places to see near Venice

Today I would like to change things a little and spend a few words NOT on Venice, but on a few amazing little towns very close to it.

You see, every time I get to spend some time with tourists in Venice, I say the same thing: Italy is not about its 4-5 most popular cities, but about the hundreds of little towns on hills, sea, and mountains. There are almost no distances between one town and another and 99% of them are exceptionally good and definitely worth seeing. 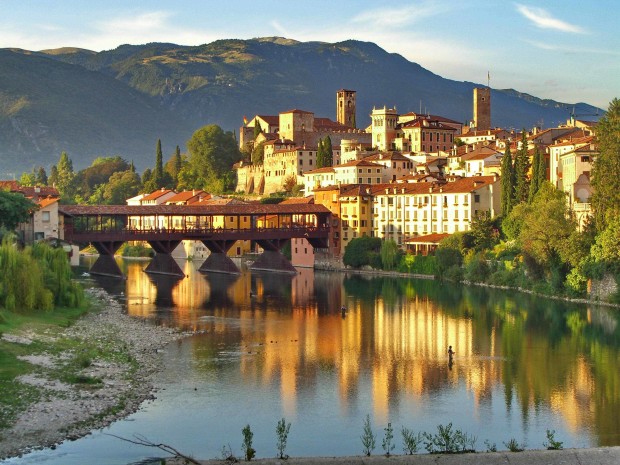 View of Bassano del Grappa from outside

Just imagine the famous Cinque Terre, or the hills near Florence with Montepulciano, Montalcino: what’s better than relaxing and enjoying a few slow days outside the traffic and pollution, enjoying unique local products and walking hand in hand with your lover in these romantic little towns? Trust your Italian Buddy and do yourself this favor, don’t just bite the touristic slice of Italy, eat the whole cake!

This is the reason why today we’re going to talk a little bit about the most amazing places to see near Venice.

You should already know that Padova and Treviso, which are only 30 minutes train from Venice are definitely a must see (and also Verona which is a bit more far but one of my favourite cities in Italy), so we’ll focus just on the small towns. The downside is that: you’ll need to rent a car, if you don’t have yours. I know, it’s a bit of a turn off but you’ll thank me later, believe me

Arquà Petrarca is a small town on the Euganean Hills, on the road from Padova to Monselice (see below) and takes part of its name from the famous italian poet Francesco Petrarca who lived here.

The town has only 1800 inhabitants and it’s a UNESCO world heritage site, founded originally during the bronze age, and with a small castle built in 985 d.C. 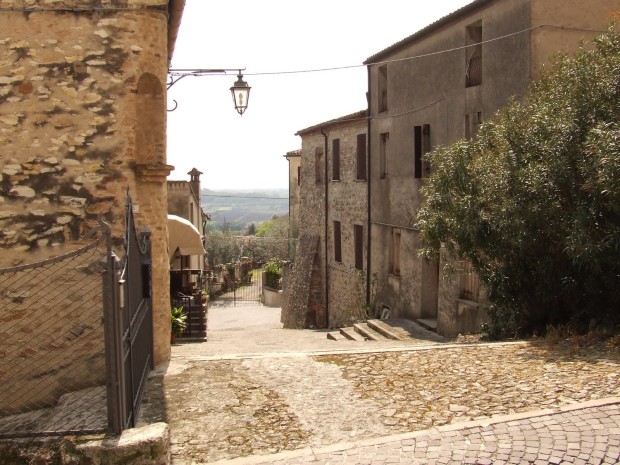 Arquà Petrarca on the Euganean Hills

It also has a perfectly strategic location (for you) cause in the same day you can travel from Venice to Padova, see my hometown, then move to Arquà Petrarca and finally to Monselice. It only takes a few hours to visit Arquà, it’s a very small but cozy place, especially in autumn and winter, and it’s also very close to Abano Terme and it’s spas.

We strongly suggest you to buy here a local liquor, produced only in Arquà: Brodo di Giuggiole made with jujubes. 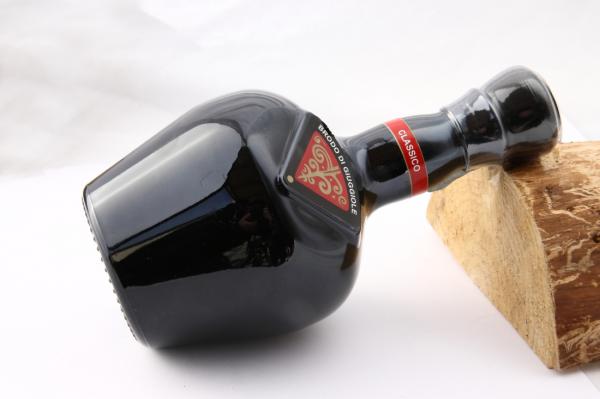 Much bigger than Arquà, with 14.000 inhabitants, Marostica is a small town on the hills outside Vicenza.

Just like Arquà, it takes just a few hours to see it, but if you feel like it you can reach up top of the hill to visit the citadel and the castle. I strongly suggest it, as one of my most romantic memories with my girlfriend was set right there 😉 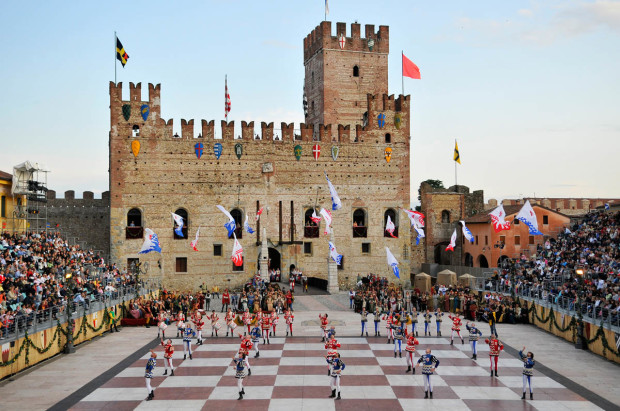 Anyway, Marostica is famous almost all over the world for it’s live chess game. It’s a special event that takes place every year in September (this year it was from the 12th to 14th) and it’s followed up by dances, parades, and much more. Everybody is dressed in medieval costumes, there’s music and it’s definitely something that will be very difficult to see elsewhere.

On the road from Padova to Ferrara-Bologna, has it’s own highway exit and train stop. Among these five towns this is surely the easiest to reach, both by train and by car (there are buses as well, from Padova).

It’s actually quite a big town, compared to the previous two, with 17.000 inhabitants and it’s famous especially for it’s castle, that you can see from far away, up on a hill. 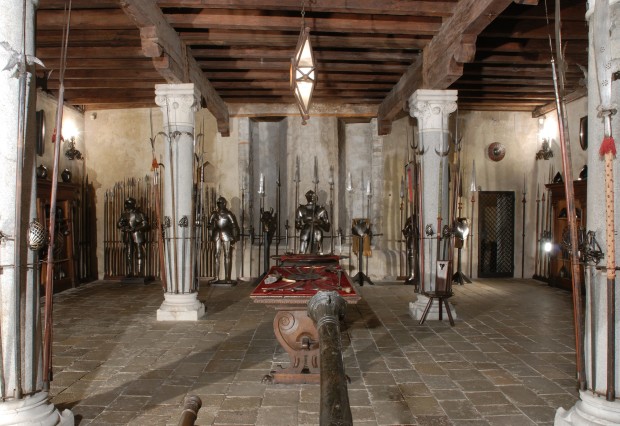 The armory inside Monselice’s Castle

The insides of the castle are very interesting and I strongly suggest you to visit it. There’s a ticket, of course, but it’s only like 5€ and trust me it’s worth it. The castle is one of the biggest in North Italy, has amazing gardens and a very rich armory. If you have kids with you, or if like me you enjoy medieval history, this is THE place for you.

Among these five towns, it’s actually my favourite, but I figured to put it at second place for it’s small size (compared to the winner).

Again, this is a very romantic town, taking a walk here, especially in autumn and winter near Christmas will make you gain at least 1000 points with your crush/girlfriend/lover/wife, you’ll thank me later 😉 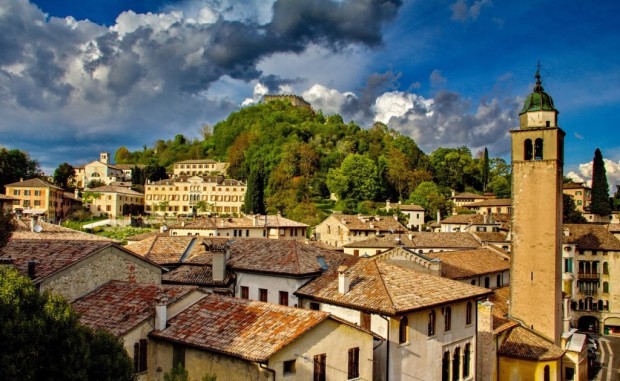 There’s also lots of excellent places where to drink wine and eat platters of cheese and affettati, and has also one of my top 3 favourite restaurants in the Veneto region.

You know that usually I don’t recommend specific places but in this case it’s really worth it: the name is Ca’Derton and just to give you an idea, I ate here a roasted milk suckling pig so good that I remembered it’s taste for at least one month.

The biggest of these five, with 43.000 inhabitants. The site is one of the oldest of our region, and was first colonized around 800 b.C. Anyway, just like the others before, this town gained most of it’s structure and size in the middle ages around 1100 when the walls where built. 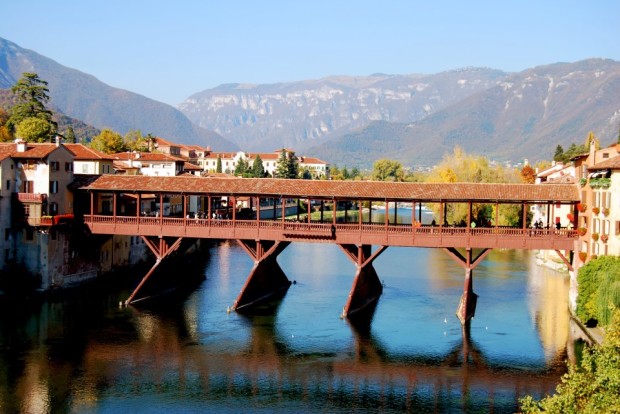 This town is mostly famous for it’s long wooden bridge, called “Ponte Vecchio” or “Ponte degli Alpini”, that was design by architect Palladio, who you may already know for the several stunning villas he built in our region. It’s also one of the areas in Veneto more affected by the 1st and especially the 2nd world war where it became a strategic point for the defense of North-East Italy.

In 1945, to stop the nazi attack, a small group of volunteers blew up the bridge. The maneuver was successful, but not without losses. After the war the bridge was built again, following the original Palladio project and now it’s one of the most visited places in the city.

If you’re stopping here, we also suggest to buy a bottle or two of grappa, a very typical local strong liquor.

That’s it guys, there are TONS of other interesting small towns, this is just a a taste. If you think we missed your favourite place, write us a line and we’ll try to fix it