A view to Grand Canal

Our buddy Elvio is a fan of trivia, mysteries and stuff like this about Venice. He sent me this interesting piece.

In Venice, in between of the labyrinth of calli and campielli, it’s very rare to find streets with the name of famous people who weren’t born in Venice, like it normally happens in other Italian cities. There are very few exceptions, for instance via Garibaldi (near Biennale) or calle Giuseppe Verdi in Cannareggio near Cà D’Oro. 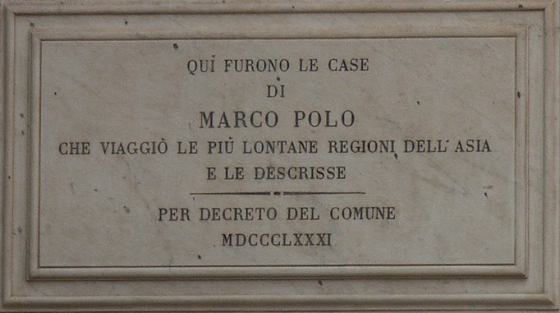 Marco Polo’s plate where he lived in Venice

To tell the truth, the few streets named by famous people are almost always related to important Venetian families (like Corte Contarini, Ramo Venier, Calle Corner, etc.), because in the past centuries most of the streets names where given by proximity with churches or shops. For instance there are 31 “calle del forno”, where “forno” means oven and 16 “calle del magazen”, where “magazen” means warehouse… Would you like to be a mailman in Venice?  😉

Anyhow, there are a few famous people that tied their names with Venice, and their names are placed as merit not on streets but on the facades of buildings and houses where they lived or died.

The most famous in chronological order is Marco Polo, who was born in Venice, and started here his journey to the East. In his honor, the neighborhood where he lived is now called “Corte del Million” (as the book of his adventures)

Giacomo Casanova had other kind of “adventures”. He was born in Venice near San Samuele church, near Accademia, while near Santa Maria Formosa there is a tombstone in memory of a young Wolfgang Amadeus Mozard who performed here when he was only 15 years old.

Another musician, Antonio Vivaldi is honored in Riva degli Schiavoni, while on the facade of Arsenale there are a few verses of the “Divina Commedia” that testify the time when Dante Alighieri visited this place.
On Canal Grande on the facade of Cà Vendramin Calergi (now Casinò di Venezia), a plate shows that Richard Wagner died right there.

Last but not least, a plate near San Sebastiano in Dorsoduro honors the time when Amedeo Modigliani lived there at the beginning of 20th century.

There are lots more commemorative plates in all the city. If you find them, post them on our facebook page!